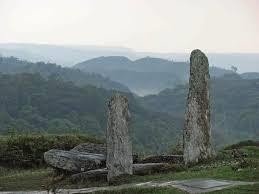 The Khasi Hills Community Project has completed 10 years of successful operation. The project has mobilized approximately 7,250 families to protect and restore 2,847 hectares of old-growth, montane cloud forests in the Umiam River Watershed. In addition, project communities are working to regenerate nearly 9,000 hectares of degraded forest. In return for their efforts to save their community forests from logging, forest fires, mining, and conversion to agriculture, the project provides communities with a diverse set of social and economic activities. The project is reaching its goal of increasing household income as new village surveys show that 70 percent of the families are below India’s poverty line, compared to earlier numbers of 90%. The project also seeks to improve public health through the provision of clean drinking water systems and smokeless cooking technologies, such as LPG, to reduce household air pollution.

The COVID-19 pandemic has produced heavy restrictions once again in Meghalaya with a large number of cases now moving through the rural India, including project areas. During the second quarter of 2021, new daily covid cases in the state were steadily in the 500 range. Community Facilitators and Youth Volunteers have continued with forest patrols, monitoring, and distribution where possible. The team was restricted from travel to the field during the entire month of May and relied heavily on community involvement, video meetings, and remote work. The project continues to distribute masks and practice distancing in efforts to reduce the spread.

Conserving the montane cloud forests along the steep banks of the Umiam River is a major goal of the project. The dense forests drop over 500 meters to the rushing waters of the River which subsequently flows into Bangladesh. The historic David Scott Trail constructed in the early 19th century, winds its way up the river gorge and has become a popular hiking route and tourist destination. A portion of the trail is on project land and the community constructed rest-stops and provides maps and guides. It continues to be an important eco-tourism community project. Forest conservation is complemented by community efforts to restore forest fragments on the hill tops above the river, creating a wildlife corridor that extends from the 2,000-meter plateau down to the Bangladesh plains. This habitat supports a broad range of birdlife, reptiles, and mammals, as well as amphibians, fish, and orchids, some of which are found only in this area.

An important project strategy to reduce deforestation and forest degradation is community- based forest fire control. The project has continued to train local Community Facilitators in monitoring the production, transport, and use of charcoal within the project area. This second quarter is characterized by the beginning of the monsoon season, which brings relief from the fires. However, the rains this year were very late and not as prolific as usual. Measurement of area affected by fire continued into the first week of April 2021.

With nearly 9,000 hectares of degraded forest land, the project seeks to restore these areas to improve wildlife habitat, increase the hydrological function of the watershed, and sequester atmospheric carbon. Each participating village identifies the degraded community forests that they want to restore and agrees to close the land to firewood collection, grazing, and agriculture. The villages receive support from the project to clear fire lines, remove weeds and scrub, and open space for emerging saplings. Gaps are filled with seedlings and saplings. Currently there are over 1,580 hectares being actively restored with Assisted Natural Regeneration (ANR) treatment. Villages are finding that restoring the watershed is resulting in better stream flow levels, as well as water availability in the dry season. Throughout the month of June nearly 10,000 saplings were planted by community members, youth volunteers, SHGs, and CFs in ANR areas, community forests, and land affected by forest fire.

Household firewood consumption for cooking and heating is a major driver of deforestation in the project area as well as contributing to indoor smoke pollution that causes respiratory illness. In addition, fuelwood burning also is a major source of carbon emissions. To address these problems, the project is working to supply all project families with LPG cooktops, LPG cylinders, and electric rice cookers. Surveys were completed during the month of April and most beneficiaries have found cooking with LPG to be easy and faster. One of the challenges is the distance to refill the cylinder. Adoption of gas cooktops has reduced firewood consumption an average of 2.5 kgs of fuelwood per day for each household. Fuelwood continues to be monitored by Youth Volunteers in the communities.

To get a better understanding of how families use fuel currently, including fuelwood and charcoal, the project is conducting ongoing surveys based on fuel needs and current arrangements. This will also provide information on which families are already implementing LPG and which would like to do so in the future. To date, 2,279 new LPG connections have been distributed to beneficiaries.

With most families dependent on farming for their income, improving agricultural practices has been a project priority. The project team seeks to assist families from a heavy dependence on low value potato cultivation to diversify into horticulture, polyhouse vegetable growing, and organic farming. After the project distributed polyhouses and shade nets, village families have been able to start cultivating a number of vegetables like mustard leaves, strawberries, and tomatoes to generate income. SHGs are also involved with vermicomposting to increase value-added products to their marketable goods and for use in their own agricultural practices. During this quarter, poultry and eggs were sold and beneficiaries were monitored for their upkeep of the animals. Beneficiaries were able to sell their poultry for Rs. 250- 300/kg, eggs at Rs. 10 each, and pigs for Rs. 9,000-11,500 each.

During the 2nd quarter, eco-tourism sites were closed again in the area due to the Covid lockdown. Guides are eager to share the cultural beauty with others once again and rely on this for their livelihood. Several of the communities have been using Eco-tourism grants to build better facilities, hiking trails, and viewpoints during the lockdown in anticipation of future visitors.

As part of the project’s sustainable agriculture program which includes organic farming techniques, vermiculture, and composting the project team is also providing high value fruit trees to project families. This helps diversify farm produce, especially low value potato farming on which many families depend. Fruit trees also provide produce that can be converted to value-added jams and jellies. The fruit trees are found to have a high survival rate when protected from grazing animals. Beneficiaries are able to sell peaches for Rs. 30-70/kg.

Additionally, project sponsored polyhouses and shade nets have provided shelter to produce ornamental flowers and bedding plants, like Alstroemeria, which have a good market in Meghalaya.

The project continues to oversee a mushroom cultivation programme and has been expanding this high value production system given the conducive moist, high elevation environment. Oyster mushrooms bring in a good return for local families once the mushroom house has been constructed. Beneficiaries are able to sell the mushrooms for Rs. 300/kg.

The project is currently in the process of forming an SHG Federation which Federation could improve and overcome the inherent limitations of small and informal groups, like limited resources, capacity, negotiation and bargaining powers and an inability to deal with the outside world such as Government, mainstream institutions, and markets. The project team organized an awareness programme about the Federation of SHGs at Umkaber village where there were 70 attendees, including 21 SHGs, present for the programme. Lady Community Facilitators are also spreading awareness about the SHG Federation while meeting with SHGs in their respective Hima. Each year the project provides the participating communities with community development grants to fund projects that benefit many village families. The villages prepare proposals for priority projects. Most communities use the funds for sanitation, water projects, and school upkeep. Lower Working Committees continue to meet and discuss finances as well as grant-funded projects. The Forestry Team measured an area of 3 Ha affected by fire at Lumpyllum, Mawmyrsiang, Hima Mawphlang with the CF, Asst. CF and Local Youth Volunteer. Laying of temporary plots (10x10m) to measure species richness and diversity in open and dense forests took place at Lawkhla, Hima Nongspung along with the Local Youth Volunteers and Asst CF of Hima Nongspung. 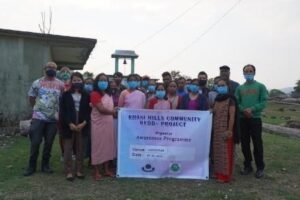 An awareness programme was conducted at Laitsohum village. The programme was chaired by the Headman of the village with 31 participants in attendance. The Forestry Team measured the area affected by fire at Lumdiengngan, Mawmihthied, Hima Sohra and Lumwahlyer, Hima Sohrarim along with the Secretary of Mawmihthied village and the CF of Hima Sohra. ANR mapping took place at Wahrahaw, Hima Mawphlang. A total of 17 Ha was measured at Lum Pamsynrih, Wahrahaw in the presence of the Secretary of Wahrahaw village and the CF and Asst. CF of Hima Mawphlang.

The Forestry Team monitored the home-based nurseries at Kyiem, Hima Mawphlang, Mr. Martin Nongbet of Hima Pamsanngut, and Hima Mylliem. Seeds were distributed and the HBN at Kyiem village will be able to provide about 2,000 saplings for the plantation season. 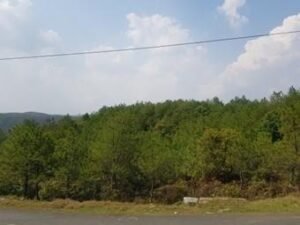 The Forestry Team took photos and monitored the forest site at Synrangsohnoh village to track the change in landscape from previous years. The village area and community forests were mapped at Laitsohum village, Mawsynram, Hima Nonglwai in the presence of the village Headman, village Executive Members, and the CF of Hima Nonglwai. The month of May was faced with a complete lockdown in the district; travelling was severely affected which made the team less efficient during the month. The team had to rely on the CFs mobility during the month. Some villages had consideration on movement which allowed the CFs to carry out certain activities. Many of the livelihood projects were monitored during this time as well as nursery and plot monitoring. The team monitored the two HBNs of Hima Laitkroh. The team found that the nurseries are well maintained with species diversity. The nurseries contain about 2000 saplings each. The team visited the Kyrphei village to brief on the protocol for measurement of scrub land. The forestry team members along with the CF of Hima Myliiem were present on the day. The Forestry Team mapped the ANR area (8 Ha) at Lumsem, Mawrohroh along with the CF and Youth Volunteer of Hima Nongspung. The Forestry Team participated in tree plantation at Lumshnong, Laitthemlangsah with Youth Volunteers and the CF of Hima Mawbeh. 300 saplings of Alder species were planted on that day.

Throughout the month of June nearly 10,000 trees were planted by Youth Volunteers, SHGs, and CFs.

During the 2021 2nd quarter, a Lesser Caucal was rescued in Mawrohroh village. The bird was released by the team along with the CF and Youth Volunteer of Hima Nongspung. Another unknown bird was also spotted in Diengkynthung, Umsawlia Kyrphei. Rabbit excreta was found by the CF in Phod Lwkhla ANR. Giant lilies, orchids, and a frog were also recorded by CFs during this quarter.